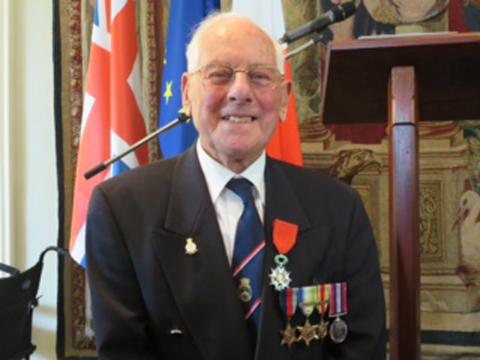 CEDARS Village has congratultated resident and war veteran Sidney Downer – who has been given a prestigious military award for his part in the D Day Landings.

Signing up to the Navy as a 19-year-old seaman, Sidney went on to be part of military operation that was to help liberate France and mark the end of World War II.

Great grandfather Sydney (94) has been awarded the Chevalier dans I’Order National de la Legion d’Honneur – one of the highest awards bestowed on people for gallantry – presented to him by the French Ambassador.

Sidney was recently invited to the French Embassy along with 18 other ex-servicemen and women, to be honoured for the part they played in the D Day Landings in June 1944.

He explained: “I was contacted by the Royal Naval Association about four or five months ago to say that the French Government was making a series of awards to commemorate the 70th anniversary of the end of the War.

“After submitting my story, I was contacted by the MOD to say my information had been approved by the French Government and I was subsequently invited to the award ceremony at the French Embassy in Kensington.”

Sidney, who left the Navy in 1946, travelled to London with his three daughters and youngest grandson to receive the award.

He recalls: “I was a Sub Lt in the navy and aged 22 when I took part in the mission which helped to liberate France, which we all know as the D Day Landings.

“We took part in a briefing called Operation Glimmer, where we were given equipment to make various sounds in the waters to mimic ships anchoring, to fool the Germans into thinking that the landings were to take place in the Pas-De Calais area.

“The D Day Landings were due to take place on 4 June, but the weather that night was so bad that it had to be postponed until the next day. We were guided to Boulogne to carry out our mission by coastal forces just half a mile off the coast.

“On the Kent shore, the army has placed fake plastic tanks, again to trick the Germans, while overhead the Dambusters dropped metallic confetti to confuse the German radar systems.

“We had been told before the operation that we had a 50/50 chance of survival, so without fear or feelings we just had to get on and do the job.”

Sidney, who has seven grandchildren and two great grandchildren to share his tales with, moved to Cedars Village two years ago to be closer to family after his wife Sylvia sadly passed away three years ago.