In September there were three one-off events at Blagdon Village. These were the annual Decade Busters Party at the beginning of the month, a coach outing, and a themed supper in the restaurant near the end. 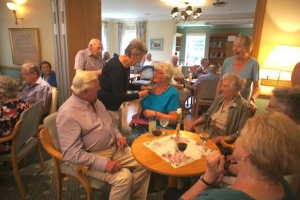 The Decade Busters Party:
This annual event was first introduced in 2009 as a means of honouring all those residents who reached another decade in their lives during the year. It has been repeated every year since.

This year twelve residents were our guests although sadly three were unable to be present due to other commitments. The bar was open and there was a buffet tea prepared by our willing volunteers. If the weather is fine we usually hold a lighthearted putting competition, but this time the forecast was decidedly discouraging so we had a quiz instead. The general view was that the event was a success and it was certainly appreciated by the “Busters”.

Coach outing:
Yet another fully booked coach outing, this time to Dartmouth. It was a glorious late summer day, which enabled all the participants to enjoy all that the town had to offer. Sadly, this was the last organised outing until the better weather returns in the spring.

Themed supper:
Whenever possible a themed supper evening is held once a month and serves as a good way of ensuring a good attendance in our restaurant. September’s was Harvest Supper. It was a very enjoyable and convivial evening.