April was a busy month with two talks by public figures, another performance with a difference by our play reading group, the Grand National Sweepstake, and our Residents Association AGM. All of this took place on top of the regular activities.

Our first speaker was the Avon and Somerset Police and Crime Commissioner, Sue Mountstevens. She outlined what she had achieved in her first term of office and what she hoped to achieve in the future if she was re-elected in the forthcoming elections.

The general opinion within Blagdon Village is that she has done an excellent job and she was commended for standing again as an independent, free of any political pressures. We were pleased to learn of her re-election in May as the only female independent PCC in the country.

This performance by our Play Reading Group took a different format from the usual and was given to the assembled audience as they enjoyed a meal in the restaurant. We had to try and work out who was responsible for the demise of his lordship, Lord Shippe. Each of the characters, all of whom were in costume, gave their “evidence” and were quizzed by members of the audience.

The twist was that the individual players did not know who was responsible either until all was revealed at the end. Altogether it was a very novel and entertaining evening.

This is a guaranteed fixture in our calendar every year, which always has a good attendance in a party atmosphere. The main viewing was in the Function Room where live TV was streamed through our superb AV system, but a TV was set up in the Garden Room for anyone who prefers to watch in quieter surroundings.

As always, all the income from the “sale of horses” was returned in prize money so there were some happy punters at the end. 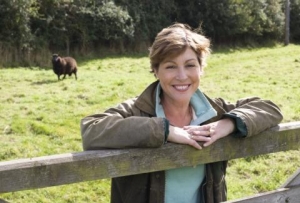 We were given an entertaining talk by Rebecca (pictured right) about her first year as our MP following her overturning of a Lib Dem majority in the General Election last year.  As well as telling us what she had done, it was amusing to hear of her initial difficulties in finding her way around the Palace of Westminster. It is worthy of note that it was reported before her visit that she is the tenth most active MP in the House.